The Most Common Treatment

Your dentist may recommend a splint to treat your TMJ. A splint is a removable dental appliance that covers several or all of the upper or lower teeth. Constructed in a dental lab, splints are typically made of hard acrylic resin and molded from an impression of your teeth. After the splint is made, the dentist will fit and readjust it. You will be expected to wear it at the recommended times (all day, only at night, both), as well as to come in for follow-up appointments to check on how your symptoms are progressing and to have the splint readjusted, if necessary. Your dentist will advise you about how to best care for the splint. 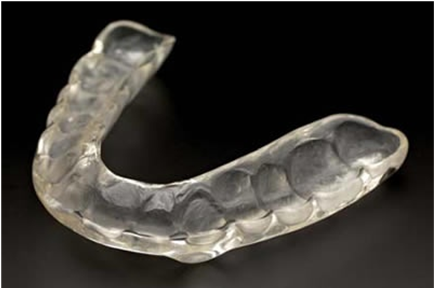 How to Report a Device Problem

Should you be experiencing any type of TMJ device problem, it is important that you report these issues here.

According to the National Institutes of Health brochure on TMJ, “if a splint is recommended, it should be for a short time and should not cause permanent changes in the bite (move jaw forward/back or cover only certain teeth).” If a splint causes or increases pain, the National Institutes of Health brochure on TMJ says you should stop using it and see your provider who made the splint. It is advised to ask the dentist specifically if the splint he/she is planning for you will change the position of your bite/jaw. In addition, there are a number of questions below to ask.

Also, some patients may find wearing a splint causes or increases clenching and grinding. If this is the case, you should stop wearing it and talk to your dentist.

What is the Purpose of Using a Splint to Treat TMJ Problems?

Patients should be aware that various dentists may offer different reasons for proposing the use of a splint in treating your jaw problem. There are two broad categories:

The second approach is not supported by current scientific evidence and poses serious risks because of its irreversibility. Therefore, before proceeding with using a jaw-repositioning splint, you should ask your dentist some or all of the questions listed below.

There are also several distinct types of splints:

According the 2020 National Academy of Medicine report, “Data regarding the effectiveness of intraoral appliance therapy in the treatment of TMJ is generally of poor quality and yields mixed results…Because of the hundreds of variations in intraoral appliance design, it is unlikely that any study could ever be conducted that will be considered sufficient to a particular dentist with a pre-existing belief about the effectiveness of one appliance. Simply stated, some dentists regard the evidence associated with procedural-based treatments as suspect unless the treatment was done ‘in my hands’.”

Some dentists require that you sign a contract for splints and/or a whole treatment “package” before they will make and fit your splint. This may include the kinds of treatment procedures described above in category 2. Please be aware that by signing a contract for thousands of dollars in advance of the procedure, in many cases, you are committing to pay the full amount of the contract even if you are unable to wear the splint due to pain and or dysfunction.

Splints can cost thousands of dollars – multiple appointments are scheduled for initial and follow-up examinations, as well as fittings. Due to the lack of scientific evidence verifying safety and effectiveness of splints, neither medical nor dental insurance may cover this treatment. Make sure to check with your insurance carrier in advance.

Questions to Ask Your Dentist

We thank Charles S. Greene, D.D.S., Clinical Professor, Department of Orthodontics, UIC College of Dentistry, Chicago, IL for his many years as the TMJA’s clinical advisor and assistance in writing this section.

Help us Change the Face of TMJ! Join our Community for important information and breaking news on TMJ.
We do not give away or sell any information that you provide.